Put Your Hands Up, Back Away From the Revlon

I love words with power. How the sheer creation of a term can make an idea acceptable. Fresh. Wicked good.

Such is the word guyliner. Think Jack Sparrow, only not a pirate. And not Johnny-Depp-can-get-away-with-this-hot. Three cosmetic companies are now marketing toward young men. Does this mean I'm firmly beyond the generation that understands why eyeliner is jumping the emo/punk ship and pilaging the rest of the male society?

We know the Dharma camp stockpiled enough supplies to sustain the Oceanic survivors for eight seasons, but Nestor most likely hoarded the eyeliner under his cot. This seemingly everywhere leader of The Others wears more, even in suited attire, than all the women on the island combined. Is this so we can keep his character distinct in our minds from the nine hundred other secondary characters? "Oh, yeah. Here comes the metrosexual with the semi-automatic weapon." Is it a signal to the audience he's from another time? The year David Bowie applied more blue eyeshadow than aforementioned elderly relative? Yet, somehow, this may be the one normal guy on my list who can pull it off.

Exhibit B: David Cook
No, no, no, no, no. Just no. The slow evolution of David Cook from American Idol-humble to a man at the mercy of a eyeliner-wielding stylist is just wrong. We get the whole rocker thing, but even the quasi-red beard cannot pull you into Jack Sparrow Arrrrg territory. Just because Cook spouted the term in front of 22 million people and turned it mainstream doesn't mean he should own any part of it.

Exhibit C:
Brian Austin Green
This is enough to make me wish someone would start chanting, "Donna Martin graduates!" to distract me from enduring the eye burn. If you don't know who this is, no fear. One more dip into the Maybelline pool for this actor and he'll be on the second season of Confessions of a Teen Idol. 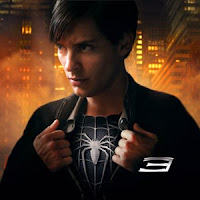 Exhibit D: Emo-Spidey
The words eyeliner and superhero should be banned from occupying the same sentence. This was such a misguided decision by make-up artists working on the movie that the term Emo-Spidey has its own place in the urban dictionary beside crappy movie. We love dark and tortured in the script, not on the eyes. 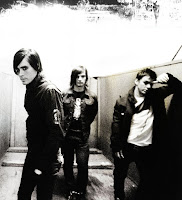 hink I'm not all up into guyliner, I offer Exhibit E:
Jared Leto
I confess to having a thing for Jared Leto since his My So-Called Life days. He gets a free pass from me for being in the music industry, though if I saw him on the street I'd chase him with a Q-tip and a jar of Vaseline. Make-up remover. Geez, people.


So why the resurgence? Must Jack Sparrow walk the plank for his fashion crimes against the male species?
Posted by L.A. Mitchell at 12:30 AM

Until this post I never really looked at guys eyes to see if they were "lined" now I suppose I'll stop buying movies.

Okay, first a big thank you for getting me current with 'guyliner'--without kids or cable, I think a lot of the youth culture passes me by.

Second, I was going to say that the men buying these cosmetics should take a test first or somthing, but I could name several women I know who still don't know how to put on makeup and probably look worse than any man with emo eyes. Sad, but true.

I noticed the guyeliner on Jack Sparrow but never really paid attention in the other cases. It's just weird.

You forgot about Charlie Chaplin!

Although I don't find it attractive I like the fact that they defy convention and express themselves this way. Reminds me of Marc Bolan - those were the days! *sigh*

Then again I'm still tempted to stick a couple of stars on my cheek...

Johnny Depp as Jack Sparrow with Guyliner, fine. But these other guys? I don't even know who they are: probably because I don't watch the boob tube.

Oh, this is just wrong. I mean, Johnny Depp can get away with almost anything, but guyliner works on no one else. David Cook looked like a 6th grade boy who got into his big sister's make-up kit... Make it stop, L.A. We're counting on you and your Q-tips :).

Take a look at the old Dennis Quaid movie, The Big Easy. One of the last scenes where he is confronting his mentor, who turns out to be the bad guy, and I swear when Dennis Q turns toward the screen, I was shocked at the amount of eye-liner he had to be wearing. I think this is a 1986 release, which is more than a bit mind-boggling. Certainly, actors wore make-up at that time, but I didn't think it would be so blatant. I'm not even sure the look the director was going for . . . it's just obvious Dennis has on make-up.

Still love the movie, but in this scene it was a distraction. Sorry, to confess to buying into the Alpha male thing, but my he-men aren't supposed to wearing make-up, even accidently on purpose.

Okay, everyone....I just read an interview with the LOST creators, Lindeloff and Case. In answer to the question about "Goth Nestor"'s character that came up at a recent Con, they swore he does not use eyeliner-that his eyes naturally appear that way. Shee-ya. Right.

Walking man and Charles...now that I've enlightened you, I'm sure you'll notice it more in movies.

Vesper...I'd forgotten about Charlie. Guess he was the first :)

Barbara...did you get the DVD I sent you?

Marilyn...I couldn't agree more. I shall do my best to rid the male species of make up.

Sandra...I never noticed that in The Big Easy. Maybe they should have fired the makeup artist.

heh! i never look at any guy close enough to see their eyes, so all this is new to me, and totally weird

nor did i watch any jack sparrow stuff, so banal

like barbara, i rarely turn on the idiot box any more....