See, the thing about kittens is they don't see their human writing companions as budding, contemporary Poe-like creatures. They see only the wicked, slovenly muse that sits atop the ladder-back chair, swinging his legs between the rungs in defiance of the author and her deadline. Cat toys poised at the desk's edge to launch a missile offensive, they view this muse a most formidable opponent capable of stalemating the most creative attacks: the mouse cord simulation of battle, the sorcery of the aquarium screen saver, the garrison claws of punishment for swift keystrokes.

All must be accomplished before the vaunted closing of the fortress doors which paw swipes cannot penetrate. But nature, he will call. And the kittens will be ready, waiting. 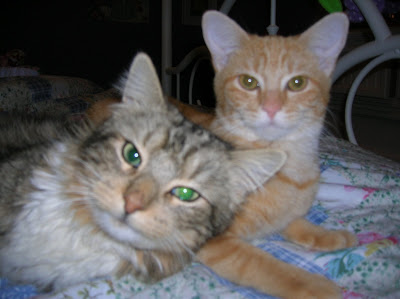 These are our two new kitties, saved from the shelter on Christmas Eve. Angus, left, is named outwardly in homage to Angus Young (inwardly a devotion to one of MacGyver's secret first names-he has three. Who else would know that?). A befitting name for a creature who acts not like a rock star, but more like a three-day binge hangover. Ginger, right, is the only redhead I'll ever profess to love and is most responsible for my wicked muse's revival.

Kitty hugs to Angus and Ginger and extra hugs to you for adopting them not only from a shelter, but on Christmas eve. Glad to hear the muse has been revived!

Awww, too cute! My neighbors have a dog named Ginger but she's not nearly as cute as this furball :) And there's nothing wrong with loving a redhead ;) (I'm married to one, lol)

Beautiful eyes. Lana has been red headed in the past. I loved her.

Do you anxiously or patiently await the days your status with the cats becomes that of mere human servant?

Aw, L.A., they're adorable. I long to have kitties living in my house again, but until my large dogs have lived their lives complete, kitten children will have to wait.

And, yes, bless you for rescuing them on Christmas Eve!

I love ginger cats, and yet, that wee beastie with the green eyes is luring my sentiments over....

my own true first love was a redhead... my mother! :O lol