Oatmeal, If You Must Know. With Slices of Time Travel.

I promised myself I would get back on the social media wagon after my intensive edits were finished. Guess that time is now. Prior to this week, my tweets were primarily feeds from the Vortex posts. I'm not totally on-board yet. It's hard to jump all-in when I'm reading about what people had for breakfast. Here are some nickpicky ranty-mc-rants from my first week wading into the deep waters of Twitter:

#1. I know tweeting is the social media equivalent to shouting in a Cowboys Stadium/Death Star sized arena to be heard but do not bombard me every five minutes with your self-promotion. Yes, I followed you because I'm friendly like that, but I will drop you faster than tofu at a cattleman's convention if you clog up my publishing industry stream with one more announcement about your iPublish masterpiece.

#2. Save the all-caps for your in-laws and gleeful screams that a Hollywood celeb is now following you.

#3. Is there such a thing as hashtag overload? I think so. It's like whoring your message out to whomever might be using the same restroom at the stadium. Your #message #disinterests#me #if you use # too many.

#4. Do not tell me what you're "fixin'" to watch on television. If you used #storagewars in your tweet, I get it already. You're a fan. 'Nuff said.

Great. Now that that's out of the way, how about some Vortex-rific links?

I stumbled upon 10 Codes You Aren't Meant to Know when researching cop codes. Now I know that a code 20 in Wal-mart doesn't relate to ass crack or spandex.

I wasn't living entirely under a rock for the past few months. Why is the dystopian thriller In Time just now coming onto my radar screen? Great premise. Not so stellar reviews.

Speaking of social media and well, time travel, The Future of Us by Jay Asher and Carolyn Mackler promises to be a fun marriage of 90's nostalgia meets YA.

Trying to find a website long gone? No problem. The Wayback Machine, named after a Rocky and Bullwinkle time travel device allows searchers to find digital footprints of web pages that have gone the 404-Not Found path.

And just to get your freaky chills on, check out this short YouTube vid of a look-alike guy immortalized in photos. Way more believable than the John Travolta-time traveler theory.

The itch to give something away has come back. Must scratch. Details Friday...
Posted by L.A. Mitchell at 2:12 PM No comments:

Labels: L.A. Mitchell, The Future of Us, time travel

First, some pesky business. Vortexer Charles Gramlich is all up into the time travel thing, and it snuck up on me. I learned via a cold Google Alert that "Battles, Broadswords and Bad Girls," is part of the pulp fiction anthology A Rip Through Time. Charles, Charles, Charles. You've been holding out on us. Vortexers, head over to Smashwords and pick this up. Ga-head. I'll wait.

Terra Nova is holding its own in the ratings battle, coming in last week in the middle of the pack in its time slot. I've held on longer than I anticipated after the second episode. Maybe it's the sixteen pack abs and that Jason O'Mara-time travel-effect, but it still slides into my DVR dutifully each week, and I still watch it when I'm caught up on all my Alfred Hitchcock Presents eppies. There are no stellar award-worthy actors here. The CGIs are laughable at best. Do I care that love is blossoming in the younger set? Nah. Give me a skeleton autopsy and a wicked hot flip of the collar, 80's-style, any day. This is, after all, Thriller Island.(Middle Aged Male clip)

Though a bit of old news, still Vortex-worthy and waaaay too sweet to pass up...

A man claiming to be from the future was arrested at Switzerland's Large Hadron Collider back in April 2010. He was searching for his time machine power unit, something that resembled a blender, near the facility's kitchen. According to police, he wore a bow tie and "rather too much tweed for his age," and refused to reveal his country of origin. Upon arrest, the man claimed, "Countries do not exist where I am from. The discovery of the Higgs boson led to limitless power, the elimination of poverty and Kit-Kats for everyone. It is a communist chocolate hellhole and I'm here to stop it ever happening."

To show you how much I adore this six-ways-of-awesome randomness, I will inject a young man with a bow tie and "rather too much tweed for his age" into my next story. When the world becomes a communist hellhole, I can't think of anything better than a Kit Kat to make that medicine go down.

Have a great Monday, everyone.
Posted by L.A. Mitchell at 1:12 PM 4 comments:

So That I Don't Spontaneously Combust

At the risk of inspiring non-writer Vortexers to stab nail scissors into their eye because this post is completely non-time travel, non-Fabio and non-snarky, I must wade into the writing craft waters for fear that if I don't, I might spontaneously combust. Yes, I'm that excited.

I did three things at the end of this round of novel edits that I've never done before. I can feel the difference in my writing, a literary seismic shifting where there had been only fifty-million years of erosion. So that's an exaggeration. Sort of. What are these three secrets, you ask?

Secret #1: echo word list
I kept a file on my flash drive for these little buggar words that constantly crept into my prose. Sometimes when writers think they're clever because they found a way to knit the word tether or decay into their character's introspection, they're really just being tired and lazy because they've already used it five times before and don't remember. Thus, the list. During page-by-page edits, any notion that I might have described someone's nostrils ad nauseum gets an entry on my echo list: nostrils. When page-by-page edits are complete, I pull out the echo list and plug them into the Find/Replace feature in Word. Replace nostrils with nostrils and Word tells you how many times the word appears in the document. Often I would find that I wasn't tired or lazy and the word only appeared twice in 70,000 words. More often, I found better, tighter ways to edit the line, always keeping in mind Stephen King's advice: throw out the thesaurus.

Secret#2: Find feature meet Achillies' Heel
My name is Laura, and I overwrite. Hello, Laura. We're talking goopy, black-tar prose that even Faulkner would have to strap on his rubbers for. I adore long sentences. I mourn that their time has come and gone in modern fiction. My Achilles' heel is the simile. I would eat them with whipped cream if I could, but as with all things sweet, too much is a stomach ache. So I used the Find feature to type in "_as_if_" and "_like_" (underscores being blank spaces) and page-by-page made every simile earn its place. Sometimes I had used three on the same page.  Ick. If that isn't enough to make a reader have sugar-stomach, I don't know what is. This will work on any Achillies' heel: passive voice, -ing clauses, throw-away words like would and had.

Secret #3: The Anatomy of Body Language
In striving to find fresh visceral responses, body language and voice cues, the well runs dry. Body parts like heart and lungs and chest and stomach become tired and lazy. So I went to an anatomy Internet site and printed a list of human body parts. How could I have written an entire novel and not used esophagus? Seriously, at the risk of sneaking in creepy words like thorax, it is a gateway to fresh writing.

Of course, secrets do not come from the ether. They are a gift for which one must thank the giver. I've given many nods to Margie Lawson over the years. This one comes with a visual. Thank you, Margie, for all your practical advice and your cheer leading. 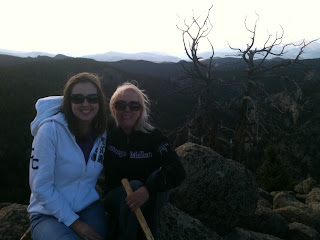 Great company, a heart-pumping vertical hike and nothing but 360 degrees of mountains
And if you are a writer and are still unfamiliar with Margie, my holiday gift to you is this link to all things that will take your writing to the next level.
﻿
What's your best editing trick?
Posted by L.A. Mitchell at 1:41 PM 3 comments:

Keep Your Mustache Out of the Hole

It's been a bit, but I'm back in full force. You know how those final edits can be. One "find" feature search of a word like "had" unearths all kinds of ugliness. But while I was seeking out potential things to add to chapter breaks, like quotes-which usually annoy me, so why would I go there?-I found old-school phone etiquette rules published before Heloise or Miss Manners were out of diapers. They were so charming, I added them to my must-share list.

Circa 1910-ish, ATT sent out telephone pledge cards to all their customers that read: "I believe in the Golden Rule and will try to be as Courteous and Considerate over the Telephone as if Face to Face." I suppose they expected the rich-y families who could afford such a luxury to gather around the parlor and recite it as if it were Gospel. If they knew we now butt-dial in discourteousness, they might declare "Astonishing!" as they rub their tonic-slicked mustaches in disgust. I love this 1910 ATT ad: 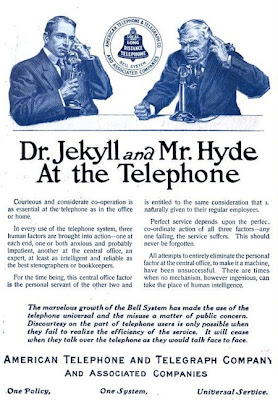 Not only is the guy on the left a handsome Kevin Costner, but he's sporting a pleasing smile while talking to the grumpy old codger on the right. Next time I'm tempted to unleash on my security company for withholding my refund for their mistake for yet another month, I'm going to think of Mr. Costner and how he was able to hold it together while the old guy uses his fist and his middle finger to make his point. Whew! Glad there weren't video phones in that decade. Tisk-Tisk, you old fart. Profanity via telephone was punishable by fine or jail time.
﻿
Speaking of mustaches...

"Speak directly into the mouthpiece," said one instruction manual, "keeping mustache out of the opening."

Also, an invitation by telephone was never acceptable. Prevailing thought of the day was that it put the invitee on the spot to accept (or lie), which is the real reason answering machines, voice mail and texting were invented: better lies come with a zen moment to construct.

Lastly, and most egregiously, was the practice of saying, "Hello?" when answering the telephone. Again, from ATT: "Would you rush into an office or up to the door of a residence and blurt out 'Hello! Hello! Who am I talking to?' No, one should open conversations with phrases such as 'Mr. Wood, of Curtis and Sons, wishes to talk with Mr. White...' without any unnecessary and undignified 'Hellos." The most undignified thing about this is the mental picture of someone barging into someone's residence at all.

So where does this leave us? I can't see that breeches in phone etiquette have changed much. People still talk on their phone when they get to the front of a line, speak too loudly in public, blow off the company around them in favor of those who are texting them, and think everyone appreciates their Lady Gaga soundbyte ringtone. Thankfully, keeping the mustache out of the hole is the least of our worries, which must be a tremendous relief to the Tom Sellecks of the world.

What is your biggest pet peeve about cell phone etiquette?
Posted by L.A. Mitchell at 4:43 AM 3 comments: