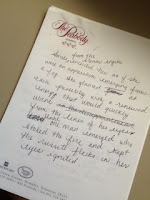 I'm thirty-thousand words into my ghostwriting project-which is awesome. And I'm not entirely certain what my next thirty-thousand will be-which is downright terrifying and not-so-awesome for a plotter-girl like me. So I turned to my paperwork: conference worksheets, notes from a thousand Saturdays ago when I had an epiphany at a chapter meeting, online workshop materials, initial brainstorm lists, secondary brainstorm lists, brainstorm lists about the brainstorm lists (I wish I was kidding about this, but I'm not). In  this archaeological dig through my writing archives, I discovered four small slips of paper, each with the letterhead from the Peabody in Memphis, Tennessee. From the first writing conference I attended eleven years ago, each contains something I thought important enough to commit to paper. Promise me you won't laugh. Promise.

Peabody Nugget Number One:
Smoke from the steam engine encircled her as if she were an apparition emerging from a fog. She glanced from at each passerby with a renewed energy that would quickly wane in the disappointment from the lines of her eyes. Until one man emerged who stoked the fire and kept the russet flecks in her eyes ignited.

Wow. I don't even know where to start. This chick is obviously in close proximity to a live train, but the point of view is schizophrenic at best. My metal-filled molars are screaming at the prospect of biting down on this hunk of foil. I'm pretty sure I loaded up at the romance buffet line that morning, with heaping piles of hotcakes and I-can't-believe-Fabio-isn't-here butter and purged it that evening all over this poor, unsuspecting note pad.

Peabody Nugget Number Two:
He'd never have noticed her, so ordinary was she, had the woman not drawn attention to herself by stumbling down the passenger car steps, creating a domino effect of passengers lying in a heap among luggage and stray accessories. She flipped her bonnet away from her forehead and glared back at the steps as if they'd awakened for her the sole purpose of her embarrassment and grabbed her a foot.

So I had trains on the brain for this conference. Sue me. The only redeeming thing here is that the heroine took a major digger off the platform. And that the hero was there to witness it and find amusement. Tripping is funny, people. Any way you slice it.

Now this is a nugget worth remembering. Well worth the sacrificial pulp and ink. That it is attributed to one of my favorite romance authors is even better.

Betty lit a solitary candle. The flame dancinged in response to her heavy sigh, mirroring the pre-dawn dreariness just beyond the window. She glanced at the lifeless phone, then the light switch before her eyelids dropped with heaviness.

Poor Betty. No really. She's trapped in a cliché-storm where the earth's gravitational pull is conspiring against her and she has a telekinetic gift of which she is, apparently, unaware.


Why do I share these, you ask? Life has a way of sending messages when we most need to hear them. I needed to see these today to remind myself how far I have come as a writer. A gift of perspective not everyone gets.

I wish I could say I remember writing these Peabody nuggets. I don't. I remember the duck parade with more clarity. Yesterday, I reread chapter one from my current project. I don't remember writing much of that, either. Writing is a strange beast. It hijacks the mind and turns the body into a conduit for truth. Somewhere in this hijacked landscape waits a klutz, a house-bound frau, and a siren with red-flecked eyes who is sure to become someone's desire. Maybe one of them will step forward in my next thirty-thousand. Maybe not. For today I am thankful for the reminder.

What message did life send you today?
Posted by L.A. Mitchell at 11:17 AM 1 comment: