No, You Can't Go As a Nude Clock Guy on Halloween

Oh how I have missed this little slice of real estate. Hope you all behaved yourselves during the hiatus. I return bearing gifts-for the ladies especially-but I don't think any guy would have to check his man-card at the door for this. After all, they are only cartoon parts and not very big ones at that. My new favorite clock is digital and face and all male. Click on any guy at any time and it changes from analog to old-fashioned. What time-traveler-girl in her right mind wouldn't love it?

Next month, look for Stephen King's much-anticipated dip into the time travel waters. In this short clip, he talks about tackling not only such a monumental topic as Kennedy's assassination but the unique challenges of time travel. When I finished my first time travel novel, I brought it to a local published writer who read the first chapter and synopsis and said, "In more capable hands, this can't be done." Her backhanded pessimism could not have been more of a gift. The day it is published, I will send her flowers. Time travel is an enormous challenge to write and therein lies the reward. When the threads weave into a perfect pattern and I've touched on that universal "what-if" we've all experienced, the sense of accomplishment it staggering. I can't think of any more capable hands than Mr. King.

If you're in the mood for creepy, romantic flash fiction this Halloween and haven't yet read it, you'll find my 2010 Bump in the Night Finalist entry, Home, on my website. Excuse Me. You Have Hiatus in Your Teeth 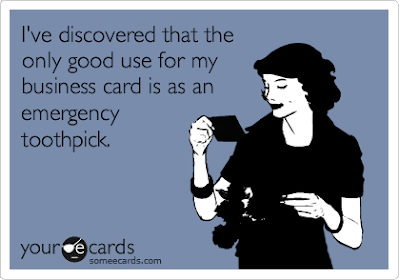 Not entirely untrue, as I'm not actively submitting the novel it touts. Random thought to start you down the path of where-I-have-been WTH-ery.
I'm on a deadline so must take a blog hiatus until Halloween. At that time, I will dance through the art museum in a sailor dress, listen to some horribly overblown pop star's music, clean out my meat drawer and paint emoticons on my bathroom wall (not kidding on that last one-will share pic when it's done). For everything there is a season, a time for activity under heaven and now is the time for final edits.
Eat, drink and be merry whilst I work. Better yet, visit those on my blog roll, check out their new releases, buy them on your Kindle. And be good to each other.
See you on Halloween. Boo!﻿
Posted by L.A. Mitchell at 7:11 PM 2 comments:

Coffee. Jeez.  What do you think this is, an Airplane! quote?

I'm going all random on you today. Let's see where we end up.

First, as the world mourns the loss of Steve Jobs, I'm mourning the loss of writing spot number three. Sure, I hadn't been there in three months. I'm writing at home these days. It still makes me sad to see a mom-and-pop go.

Next, a science fiction submission call for Vortex writer peeps. No romance required. Press release from Angela James, Carina Press: Carina Press is pleased to announce a call for submissions for our 2012 holiday collections. This will be the only open collection call for 2012 and is an excellent opportunity for authors interested in participating in the normally by-invitation-only Carina Press collections. Carina is looking for science fiction novellas with a winter holiday theme, to be published digitally both individually and as a collection in December 2012. The novellas should be from 18,000 to 35,000 words and feature science fiction elements as integral to the novella. The stories do not need to be romance, or even have romance elements, but can be straight science fiction, or science fiction with romantic elements, and can also feature elements of mystery, thriller, horror or other sub-genres. FMI.

Time travel and Jane Austen? I know one Vortex peep who will faint dead away.

And who knew Wikipedia had an entry devoted entirely to time travel urban legends? Am I in heaven?


This deliciously dark-humored advertisement from Alfred Hitchcock for his newly-released Rear Window popped up in a trade magazine in 1964. Only Hitch could get away with this. 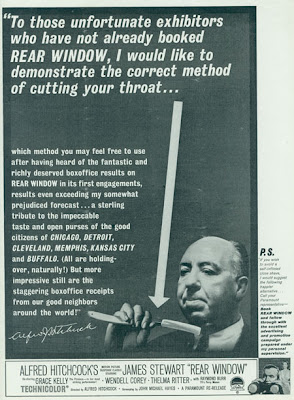 Terra Nova, The Dino Poo of a Lost Attempt

Let me lay it all out there before I dissect Terra Nova. The show is a thinly-veiled attempt to recapture the win that was LOST, a wannabe that will never be. Good. Now that that's out of the way... 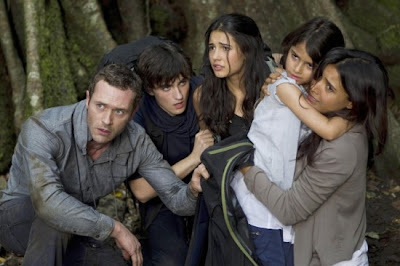 I adored the first hour of the pilot, Genesis. Maybe that's because I'm more into time travel than dino poo. Though a bit heavy-handed with environmental agenda, I loved the concept of where our planet will be in a hundred and thirty some-odd years. I loved a protagonist that I could root for from scene one. I love that he is sixteen ways of hot, is all alpha-male, resourceful, tortured and fiercely protective of those he loves. The selection process to determine who would go back in time to be part of a new colony was exactly as I'd always imagined it: first, the most desirable citizens who had the most to offer a new civilization; second, a lottery. I love the infinite and baser conflicts inherent in trying to begin humanity anew.
The second hour lost me, pun intended. With precision and extensive dissertation, I can draw parallels between the characters in Terra Nova and the characters in LOST. The waterfall, the cryptic drawings, the overbearing, mysterious compound leader, the rogue sect, the young hottie to draw in the hard-to-pull-away-from-the-CW demographic of teenage girls. Need I continue? The only difference I could spot was dinosaurs instead of polar bears. I respect what Stephen Spielberg and FOX are trying to do.  Wait, no I don't. Why is it when networks get something truly fresh like Life on Mars (NBC), they give it a shoestring budget and mere weeks to get a foothold before they yank it, while they spend twenty-plus million on a tired spin they believe to be a guarantee? Sounds like another industry I know.

Will I continue to watch? For a time, I suppose. There is no crime in stacking up the DVR with Jason O'Mara deliciousness. But if they go all black fog on me, I'm out of there.

What do you think of Terra Nova? Am I just disgruntled because the only time travel will be in the pilot eppie?
Posted by L.A. Mitchell at 3:42 AM 4 comments:

One of my favorite parts of my twentieth high school reunion last month was re-reading my senior will. For those who didn't have that tradition, it was a final message published in newspaper format filled with inside jokes and send-offs before we were coughed out into the world. A death of youth where we left our last testament to who we had been. Reading it all these years later was like uncovering some ancient Tonkawan language where you and only one other person could deciper the clues that lead you back to a slide in AP European History class of Louis XIV looking like Dee Snyder. Reading it made me want to write another, newer version because, let's face it, no writer is ever satisfied with what they wrote. If I were to write a newer twenty-year senior will it would look like this:

For the guy I thought crashed the reunion from the downstairs bar: the letter A, so you can appear earlier in the posted yearbook pages instead of on top of the janitor's closet near the johns. Oh, and my hangover cure-all...oj, maple syrup and hair of the dog...because there was no prize for the drunkest attendee. For those women who made more rounds than Danica Patrick at the Daytona 500: a sparkly, light-up belly dancing bikini top, the only thing that would have said, notice me! in a more subtle way. For those who became snacky-drunks and partook of the bar appetizers two hours past e-coli: Rolaids, 10-pack. For the boy up the street I had a crush on: Scope, so your cigarette breath didn't shatter your twelve-year-old perfection. For G.P: A hug. I saw you wander the bar as you did the halls, mostly alone. You wouldn't have known me, but I knew you. You were our Einstein. You could have been discovering time travel that night instead of reminiscing in all the pretentiousness. For M.M: a photostrip that will never see the light of day but has a special place above my writing desk. For the name-badge table greeters: A firecracker to wake you. For the same ten individuals in a class of eight hundred who occupied the only scrolling photo display: a life apart from Facebook. For those drowning in a room full of people you think you should know but don't: the life raft and a cheat sheet that, I, myself needed. For those who botoxed, implanted, crash dieted or otherwise altered their appearance to come: the present. The past is no place to live. For who lived near me whose families always pretended to be so happy: my rose-colored glasses, well-worn.

I thought I would have something funny to say about my reunion. I tried. My Vortex 10 List started out as the Top Ten Ways HS Reunions Are Better Than Enemas, but the words never took off. This one night fell victim to the same dangers inherent in any time travel experiment: no matter when you are, you always wish to be somewhen else. In my case, right here, right now, at this moment. I wouldn't trade now for all evil mushroom appetizers in the world.

Next up: Terra Nova, The Dino Poo of a Lost Attempt
Posted by L.A. Mitchell at 1:00 PM 1 comment: