So I've recently discovered the awesomeness that is Etsy, not just because the crafty shall inherit the Earth but because of the capacity for one marketplace to sell the gotta-haves and the absurd simultaneously. Today, I give you my tour through the Etsy archives.

The Elvis Presley Thong Panty
How many Elvis fans have swayed the demand curve on this? And his Army picture, no less! God Bless America.

Time-Traveller-Scented Eau de Toilette (4 oz. mist)
"Not for the faint of heart", according to the description, this tingly mint and thyme tag-team of fragrance will appeal to the most discerning century jumper. At least it doesn't have notes of moth balls in it.

MacGyver Duct Tape Wallet
There is a guy walking around Newton, Kansas who can attest to this wallet's longevity. Two years! I have my reservations about losing my driver's license behind all that mulleted beauty.

Time Traveler Tea-Dyed Dress
For the fashion-conscious time traveler who wants to look, well, like she's raided her nanna's trunk no matter what era she pops into. Wrist to elbow watches really sell this as an "alternative wedding dress."

Time Traveler Sea Green Glass Necklace
I am SO going to be wearing this on my Rita Award night.

Time Traveler Charm Necklace
I highlight this one for no other reason than because I am on a quest to make one of these myself. Only less...well...brown.

Writer's Charm Bracelet
For those days when creativity feels like a manacle loaded with weighty effluvia.

X-files License Plate Tag
Pimps your ride as it screams either paranoid conspiracy theorist or someone who still lives in his parent's basement.

Alas, there are no Fabio-related crafts on Etsy. Someone needs to get right on that. And I know you typed in your version of jackpot keywords in Etsy's search box. Do tell and link us up. Let us know what great stuff you found.
Posted by L.A. Mitchell at 3:15 AM 7 comments:

At the risk of alienating Vortex readers who are not Losties, I wouldn't be navigating true north here without acknowledging the cathartic, fetal-position goodness that came full circle with this week's series finale. Yes, it is bizarre to count used tissues, but the couch cushion next to me held such an absurd pile, I had to quantify it. Then I decided making my own hankie scale would be more fun than a tornado in a trailer park. We'll start small:

No hankies
This is Snoopy Come Home and The Wonder Years goodness where you feel like a hairball is crowding your throat. You can't look away from the screen because the merciless teasing you would endure from your couch mates would know no bounds.


One hankie
Little House on the Prairie comes to mind here. That damned Michael London really knew how to squeeze maximum emotion out of those pioneer family crises, but there's only so much catharsis when you can't relate to a Walnut-Grove-sized drought.

This is Army Wives for me. Yeah, sometimes because of the inevitable good-bye moments, but mostly because watching Drew Fuller makes me weep for the sagging middle in my work-in-progress. And his Keanu Reeves-style acting ability is atrocious; but, hey, a girl has to get inspiration from somewhere, right?


Three hankies
We're at Somewhere in Time-level here. My love-fest for this film stems not only from the birth of my time travel preoccupation, but for its ability to consistently draw tears after I've watched it more times than any other movie ever made. Ditto for the soundtrack.


Five hankies
Definitely Bridges of Madison County cry-fest here. The movie-not the book. The scene where Meryl Streep has her hand poised on the truck's door handle and she's watching Robert Kincaid's taillights had the internal waterworks rivaling the frog-strangling rain on screen.


Ten hankies
Titanic. I watched this in a small town theater in middle-of-nowhere Kansas. This might have been an eight for me, but listening to barrel-chested John Deere plowmen lose it around me ratchets up my sobbing. I'm sure more than one farmer got his man card revoked after that night.


So you see, that's why LOST's finale was so impressive. It was akin to saying long lost-hellos and final goodbyes to everyone a family reunion except bidding Sawyer adieu proved far more difficult than leaving crazy Aunt Edna who eats salad with her fingers and thinks all women who read romance novels are spineless idiots. I wept for the sheer WTH-ery the writers dished out that will keep people debating a decade from now and for the time-travel awesomeness it brought to millions each week. And, for the extra hours in my life I'll now have to lay out my own hankie-worthy story on the page.

Lastly, a huge hug to Marilyn for sending this Lost re-enactment tribute by cats. I hope my Jon gift is enough thanks.


Your turn. Inject your hankie-worthy screen or book experiences into the scale. Let us know where they rank for you. Oh, and gentlemen, we promise not to revoke your man card if you say anything but Old Yeller, which I'm told is a guy freebie from fourth grade.
Posted by L.A. Mitchell at 9:03 AM 10 comments:

It is safe to say that around here, May is like December. Every day brings something to celebrate, something to wrap up, something to unwrap (hint, hint). What May has failed to bring thus far is time to breathe. So the Vortex took a percolating hiatus. Never far from the brain, just a thousand light years away from the keyboard. What would a comeback be without a Vortex 10 List? Not any fun, I must say.

Yesterday, I ran across a Parenting.com link tease under the title Hot Toy Alert! We're not talking Easy Bake Oven here. And, no, it wasn't from Camp Edward or Jacob-they would never be allowed on my Barbie's DC-10 with full in-flight meal service. Too vampy. It was the action-figure tie-in of Prince of Brokeback...I mean Persia. This particular action figure is like a frosted eclair oasis in the Sahara, not just because it is filled with shirtless Gyllenhaal goodness, but because there is that whole time travel thing. And I wondered: what other action figures would I allow on my Barbie's DC-10? 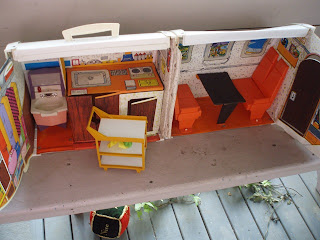 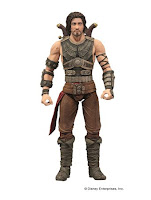 1: Jake Gyllenhaal's Prince of Persia hits a home run in the accuracy department. Complete with ripped muscles and larger-than-Ken hands, we can forgive the glazed, vacant look in his eyes. Too much Reese. We get it. Our Barbies can kick Elle's pink Margaret-Thatcher-suited butt anytime.

2: Tom Selleck's Thomas Magnum: Maybe the cabin pressure has left Tom bloated, but we forgive the extra poundage because he still looks bad ass sporting a mustache and a gun. His shirt leads me to believe our destination is somewhere with ocean views and an annoying butler. Sandra, honey, I'll book you a seat right next to this one. 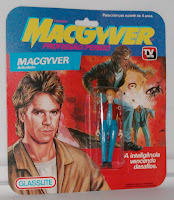 3: Richard Dean Anderson's MacGyver: Need I say more? So what if this Brazilian rendering is the only one ever produced and they failed to capture the strictly American beauty that was the mullet? So what if he looks like a blond matador in Mom jeans? He gets a boarding pass simply for being my numero uno obsession at fifteen. In-flight Skipper would agree.

4: Josh Holloway's Sawyer: Though we're unaccustomed to seeing James smile, I take comfort in knowing he has room on his raft should Barbie Air plummet into the Pacific. I might have preferred him sitting in his makeshift shelter sporting nerd glasses and reading prophetic tomes, but who can deny the wet, clingy appearance of his decidedly un-Mom jeans? Hard to tell from this angle, but a side view shows his plethora of hair blowing in thirty knot winds. Someone turn the fan down over seat 4F! 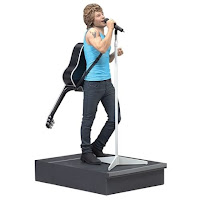 5: Jon Bon Jovi: I must confess that this passenger really isn't for me; but frankly, the Lemme doll wasn't Barbie's type. Who knew there was an entire culture of hard rock fans who collect figurines? Do they display them in lighted curio cabinets next to their bongs? I'd venture more than one woman in the world has this baby next to her Precious Moments dust trap. Marilyn?

6: Elvis: Comeback '68: Out of all the Elvis action figures, this is the one Barbie wants swiveling up the center aisle. Yeah, the Jailhouse Rock one is filled with possibility, but let's face it. The spazzy guy on the plane always ruins the trip for the rest. Stripped of the cheesy what-do-I-do-with-my-hands production ditties from his 60's movies, this all-leather clad King is better than lemon-scented hot towels in first class.

7: Dimebag Darrell: You might think this choice, when paired with the last, might cause Barbie Air to split down the center ala Oceanic 815, but this is how my Barbie rolls. Sweet and Campy one moment, all Pantera the next. Dimebag is in charge of the in-flight music and balances out the matador jacket nicely, don't you think? Barbie's mom is so going to freak.

8: David Duchovny's Fox Mulder: The truth is out there: this action figure is more handsome than the original, which earns him a boarding pass. We always knew Barbie was shallow, didn't we? Packing heat, a flashlight and no Scully to take up precious hottie space aboard Barbie Air, his study-the-heavens-for-aliens posture speaks of his tireless dedication to his cause, something that makes Barbie a little vaclempt.

9: Eric Estrada's Ponch: Keeping the skies safe is our air marshall with the brilliant white teeth and Latin love vibe. No longer straddling his department-issued cycle, this one proves that even with disproportionate-sized buttons and a sumo-wrestler gun holster, Poncherello can still bring it for Barbie because he's in uniform. 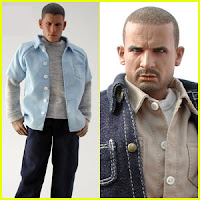 10. Wentworth Miller's Michael Scofield(left): So what if he just broke out of prison? This guy could kick Ken's golf-sweater-wearing ass and show him the meaning of anatomical correctness. At a whopping $550 a pop, this guy had better deposit gold bars in the lavatory to pay for his hotness boarding pass.


What was your favorite action figure or Barbie from childhood?
Posted by L.A. Mitchell at 7:05 AM 9 comments:

What? No Fandant Smoke Monster?

Delinquency or love? Mostly love. I adored that quasi time-traveler photo last week and wanted to know what everyone thought of it, so I left it up. All. Week. But, as with all delicious things, we must move on. Speaking of delicious, someone who-shall-remain-nameless has a b-day coming up. Wouldn't this TARDIS cake score perfection points? 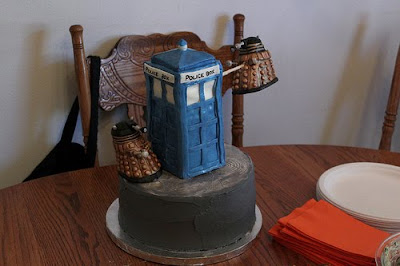 If I can't have the LOST cake, of course. The Sawyer piece. 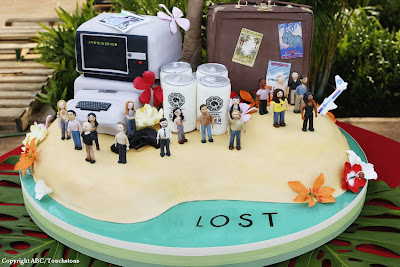 Favorite writing quote overheard this week: "I could've eaten Alphabits and crapped out a better novel."
For the high-brow among us: new research on how our brain perceives time. David Eagleman, neuroscientist at Baylor College of Medicine, runs one of the only laboratories in the world dedicated to experiments seeking hard data on how humans internalize time. Eagleman discovered that the human brain runs two clocks, one that "feeds you a perception of the now, and another that is constantly at work tidying up that perception." This tidying clock, to preserve the tremendous amount of mental energy needed, will often predict everyday stimulus that flow by unnoticed. When an out-of-the-ordinary event occurs, it seems to take longer to occur because this tidying clock could not predict it. Understanding the brain's internal time sensors has important ramifications in the study of mental illnesses, specifically hallucinations reported by schizophrenics that are potentially a time-delay of stimulus-response normally experienced near-simultaneously. Two fist bumps and a snap for the reporter who strapped on an iron pair and participated in Eagleman's fifteen story free fall experiment in the name of science.

Random Monday question:
If you wrote a screenplay on the last hour of your life (that just expired), what would you title it?
Posted by L.A. Mitchell at 2:49 AM 8 comments: