Holy Scientology, Batman! Has it been that long since I posted? I'm collecting my thoughts on the reunion (read: Vortex 10 list still to come) but I couldn't leave Vortexers out flailing in the world without a spoonful of time travel fun to make the medicine of life go down.


Check out this 1860s photograph for sale on Ebay. Aside from the uncanny and obvious resemblance to John Travolta, the seller's paragraph is what interested me. For $250,000, who wouldn't want to weave a tale of time travel? 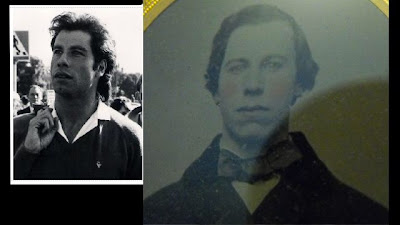 I've been so deep into my edits, I haven't even watched Terra Nova! I know, right? Time travel and Jason O'Mara! I must be sick in the head. Thus, the crickets chirping here, but I hope to have it all back in balance soon.
Next up: A Reunion Vortex 10
Posted by L.A. Mitchell at 5:58 PM 3 comments:

I wrote this post by hand. I don't do it often, but somehow it seemed more organic that way. You see, last week when I mentioned my Jordan Catalano, it wasn't just an arbitrary memory. Sure, I have a few eppies of My So-Called Life in the DVR that I get around to watching when my movie well runs dry, but it's more than that. So much more.

I understand that I'm speaking to a certain demographic of women when I mention that name: Jordan Catalano. But I'm speaking to all women when I tell you that Jordan Catalano's character was an angsty metaphor for that one painful crush we all had in high school. The one boy who could steal your breath and reduce you to Tourette's simply by occupying the same stratosphere. The one whose random eye contact could nourish your preoccupation for months, turning you into a gluttonous warrior who fought in the Darwinian halls of education for another glance. Dramatic? Hell to the yeah. This was sixteen when the world was a Bengali jungle and you just lost your machete.

My Jordan Catalano was Donatelli. Donatelli wasn't his real name. It was a name I randomly opened to in my Character Naming Sourcebook because that's what I do-make up names. He wasn't Italian, either, though I can't be sure he was from any specific heritage but the land of Hottiemanjaro. Donatelli was the pinnacle of the trifecta of three who caught my eye those years (the two others being a mullet-sporting silent-type who was a dead-ringer for a young MacGyver, the other a too-short guy with a swagger who caught me in my most embarassing moment to date).

Donatelli was an athlete: tall, dark hair, who at seventeen already had the superpower to grow a five o'clock shadow by the time practice rolled around. I told my parents I loved Donatelli's sport so I could be a manager, code for a sweat-towel-and-statistics girl who was invisible next to the cheerleaders who also rode the game-day bus. Thankfully, I wasn't alone in my transparent conspiracy. One of my best friends, too, was acquainted with the natives of Hottiemanjaro, one in particular, so we traveled the road of obscurity together. In three years, Donatelli spoke to me once.

I learned Donatelli's sport, really learned it, for all those practices and games and seasons. The head coach wrote me a letter of reference for college and helped me get a great job that lasted long past graduation. I lettered in that sport, even had the jacket, though the idea of earning it for wiping guy-sweat courtside never sat well. I graduated, went to Europe and found a real Donatelli who loved that I could be happy watching planes land at the airport and talk about his country's history with some degree of accuracy and be the geek I always was with a panache for whomping him at a certain American sport.

So why the memory? High school reunions do that, I suppose. Saturday will be my first and last in many ways to go back to the me of twenty years ago, so I cannot help but think about Donatelli. Will he be fat? Bald? Absent? Gone?

I don't live in the past, except for my stories, but for that one night, I will be a traveler there.

If you want to reminisce in Catalano goodness, watch this (7:46) and this (:58). Leave your Catalano here, in the comments, so we can love him, too. Most of all, have a great week everyone!
Posted by L.A. Mitchell at 11:15 AM 2 comments:

I have to be in the right mood. And I can't be judging any other writing contests because helpful-feedback-overload makes me want to stab every page that's not mine with a nail scissors. But sometimes when I've earned a guilty pleasure and I've seen all the My So-Called Life reruns a thousand times and thought about my own Jordan Catalano a thousand more I give myself over to the temptation that is page99test.

This website grew out of the quote by English poet and novelist Ford Madox Ford, "Open the book to page 99 and the quality of the whole will be revealed to you." Writers upload page 99 from their manuscripts and readers with user names give feedback ranging from the generic Yes, I'd read more of this to a comment box where thoughtful feedback is welcome. Browsers can select their favorite genre, or like me, choose to read every genre of fiction available.
Why is page99test my newest addiction? Though I've never actually browsed for a book in a brick and mortar using this technique, its merits are undeniable. Page 99 is random. Page 99 is near the first turning point in most novels. Mediocrity cannot hide on page 99. Page 99 is the best slice of truth about an author's ability. How many times have I judged openings of novels that had been polished ad nauseum, but lacked the rawness and fire of an untainted voice? I love that I can sample, like a literary truffle, give feedback or not and move on. I love that my user name icon keeps track of how many times I've given feedback and the number creeps higher. And, though many writer-spaces on the web invite harsh words from mental giants who believe their journey to publication includes stomping on all other prospective authors on the path before them, I haven't found that to be true of this site. In that once space of time I allow myself, I hold out hope that I'll find an author's voice that I cannot resist-that gold nugget in the pan of muddied river water that all editors and agents secretly yearn for.

After a short, short login (I know, I know...one more to remember, right?) you're on your way. It isn't a site just for writers who wish to offer critique. With simple voting buttons regarding how likely you are to want to read more or buy it in a store, it's a site catered to all readers. Do let me know what you think of it. You'll know me there by my user name-guaranteed. Maybe you'll even discover page 99 of a Time Thriller there.

Have a super weekend, everyone!
Posted by L.A. Mitchell at 6:23 AM 4 comments:

I have a lamb I wish to sacrifice to the web. This lamb, heretofore dubbed "Shorty T" because it is a short story and it involves time travel-GET OUT! I know, right?-will be given away for free. Shorty T has been previously published. Some of you may be well acquainted with Shorty T, and for that may I be the first to offer you this Etsy item of win as a token of my undying gratitude: 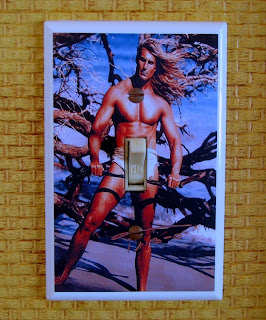 Hottie or Nottie Fabio Light switch  $9.95
The questions I wrestle with now involve how best to sacrifice Shorty T.
Does the very nature of the story lend itself better to some forms of web publishing over others? Would it be better to lay a short story out in its entirety than to serialize? Does the ease of smartphones make listening to a podcast more appealing? Would anyone really want to listen to my voice?

Recently, I talked about my serialized fiction attempt-how it became so enormously successful it took on a life of its own. Some of you may even remember my attempt on Blogger early on to serialize a romance novel with co-writers from my critique group. Good luck reading it.  No really. Blogger is set up to follow a calendar dynamic, not a serialized fiction dynamic. First installment is here if you're masochistic. Why do I keep making the roundabout back to this idea? I can't deny the serialized nature of delivering stories in the nineteenth and early twentieth century has infinite appeal to me, especially when married to the time travel angle.

I'm realistic about Shorty T. He has a crooked nose and, sure, he has his stinky moments, but I still love him and I think others might, too. Because of his very cross-genre nature I cannot narrow his appeal to one publication, one print stream of revenue in a dying short story print market. My goal is that his freedom will bring others. Give it away and an audience will grow.

So my question to you, faithful Vortexers, is in what form do you like your free reads? Podcast? Serialized Podcast? An interactive experience this story would lend itself to and, perhaps, develop beyond? A self-published read on Kindle or Nook? Serialized and delivered via RSS? You Tube? Twitter? I'm in the early stages of conceptualizing Shorty T's exit, so any and all suggestions are welcome.

Edits this week have taken me to some strange places in the merry old land of Google. Did you know there were latte art competitions? First prize in this one is a $2500 ka-ching. Looks like I picked the wrong art form to beat myself up over. Mine would look something like this: 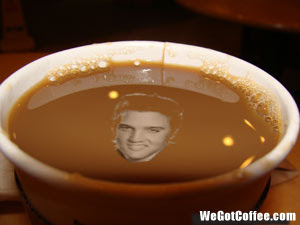 Then I had to search for cow-bladders as ice packs to see how they would have been fastened at the top. Would it look like one of those petrified bull scrotums? Mercifully, it did not yield a photograph, but did take me down the yellow brick road of bovine bile.
I also learned what rivers flow through Clear Creek County, Colorado, what a wild fescue looks like, a personal street weapon device that could be hidden in a pocket, whether the word "roommate" existed in 1881, and that all the really cool famous gunfighters hadn't taken center-stage in the mythology of the outlaw west by that date. You would totally want me to be your street shout-out on Cash Cab with all the insignificant things I know.﻿
Last three movies seen:
The Crush-Um, yeah. I thought I was the only one who hadn't seen this Lolita/Fatal Attraction hybrid. I thought I would find a kinship with the writer-ly lead character, played by Cary Elwes with an abysmal American accent, but mostly he was just a TSTL (too stupid to live) protagonist.

House of Sand and Fog-Could Sir Ben Kingsley be any more awesome than this? Wait, six degrees of separation puts him with Jake Gyllenhaal in Prince of Persia. There is your answer.  I think not.


Life as We Know It-Not so much. I watched these DVR-ed movies in fifteen minute increments when I'm eating or doing something non-writing so I don't deviate from my edits-count. This one ranks just above watching a makeover on the Hooda-Kathy Lee hour of the Today show while gagging down my frosted mini-wheats.

Reading: Will Lavender's Obedience. Love it so far.
Posted by L.A. Mitchell at 5:35 AM 2 comments: