Behind Fence Number One

There is a team of very tired, very hot (as in Texas summer hot, not Channing Tatum hot) men replacing one section of my fence today. Not even two frosty Gatorade bottles from my fridge can allay my guilt at sitting in air conditioning watching these guys labor.

What fascinates me most about this project is what it revealed about my neighbor. I've long held the opinion that we would freak if we knew half of what goes on behind our neighbors' doors. Ten years of living on this street has uncovered everything from snotty Pottery Barn obsessions and cross collections that would put the Vatican to shame to divorces, extramarital affairs, drug use, emotional and physical abuse, life and death, all hidden behind daisies in Terra cotta pots and lacquered front doors. Behind my neighbor's brass kick plate, Roman door chimes and manicured lawn, I was certain lay more opulence, more orderliness than Martha Stewart's jail cell.

Boy was I wrong.

Yesterday, the fence came down. My neighbor's backyard was a biome unto itself. Grass high enough to brush an NBA player's fanny. Relics of children long gone. A tangled nest where a garden once stood. Why would someone who mows and trims and edges and pots daisies bother with the front and not the back? Rules, I suppose. But it's more than that.

Everyone has a pocket of chaos in their life: a junk drawer, the backseat of a car, that closet at the end of the hall. Something they don't want anyone to see. I once wrote a character obsessed with orderliness. The one exception was her purse. At first, quirky, non-purse items would fall out to reveal character. But as the story progressed, the overstuffed bag became a metaphor for all the things in her life she couldn't compartmentalize. As her trust in the hero evolved, the degree to which she shared her bag's contents deepened until dark secrets tumbled out like used tissues.

I suppose my neighbor's chaos is no more than evidence of a busy man who must have two jobs to support his family. A father who doesn't want to forget the sound of children's laughter saturating the yard on a hot summer night. A gardener who gave in to the natural world's relentless ambush.

The writer in me wishes he was hiding something in the tall blades. The neighbor in me does not. 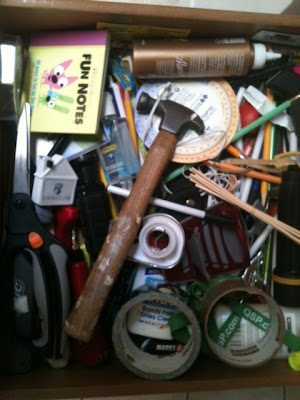 Where are you hiding your chaos?
Posted by L.A. Mitchell at 10:06 AM 4 comments:

At the risk of being super-girly and super-off-topic to start today's post, I digress from including a photo of my toes. But what writerly girl wouldn't love Sally Hanson's Salon Effects stickers in the "love letter" theme? It's a little bit of Hemmingway on my piggies for the summer. Don't bother reading the comments about how difficult they are to apply. It isn't like writing a literary masterpiece in a secondary language. It's more like writing Fifty Shades of Grey while eating a twinkie and watching Love in the Wild and hoping Ben stays longer just to hear his accent.

And, no. I'm still not over the whole Brit thing. I'm thinking my interest in the Olympics will be amped this year.

Speaking of Fifty Shades of Grey, the claws are out in writing circles. Some believe the quality of the writing is shameful and should never have been published. Some adore the books and find hope that an obscure little bit of fan fiction was able to find super-stardom (and money). My take on all this is that no one has a right to give an opinion until he/she is well-informed. First-person knowledge of the book in question. Here's a link to the free-sample opening courtesy of Random House Australia and Scribd. Should we judge the rest of the book by its opening? Hell yeah. That's the way the book industry rolls. Now you can have a well-informed opinion. You're welcome.

Did you notice the new pages of the blog? Snazzy, huh? I hope to add posts specific to ghostwriting soon. Until then, I wish you happy toes, accents like hot butter and the first few shades of grey.
Posted by L.A. Mitchell at 12:28 PM 3 comments: