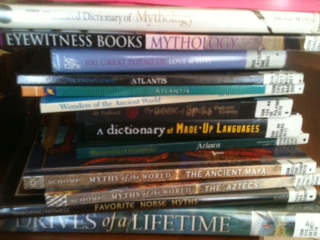 One thing I love about ghostwriting is that I become a tourist in someone else's world. On the desk beside me is a stack of research books I wouldn't have picked up in a million years: theories of Atlantis, Norse mythology, a dictionary of made-up languages and a coffee table book called Drives of a Lifetime with some wicked-inspiring photography for an alternate world found right here in our world. With six different colors of post-it notes whipping out like foreign flags on a stiff breeze, it's an invitation to explore.

Back to research, but first this Vortex tidbit...

The term guyliner has migrated from pop culture vernacular to official entry in the Oxford Dictionary. I know, right? Exciting doesn't begin to cover it. Maybe they read the Vortex's official stance on the issue. Check out thirty-four other new word entries and have a great Monday.
Posted by L.A. Mitchell at 11:58 AM 4 comments:

Ya'll Join Me For A Dallas Dissection

Stereotypes of the southern U.S. in pop culture. Discuss.

Why are reality shows (and I use the term reality loosely) like Honey Boo Boo and The Week the Women Left set in the South? Because stereotypes are based in reality. And those stereotypes make for WTH?-television that brings ratings.

I haven't lived in Texas my entire life. In fact, I have the unique perspective of being a nomad: pacific northwest, midwest, deeeep south. Those are just the places I set up residence for a respectable amount of time. I've heard stereotypes from the outside and lived them from the inside. I suppose that gives me a bit of cred when it comes to today's post about the reincarnation of the 80s television show, Dallas.

First a story. Everyone grab your binkies and warm milk and meet me on the swirly vortex rug.

When I went to Munich as an exchange student in the 90s, my host family spoke very little English. I learned quickly that academia had taught me high, proper German, not the low country dialect of Bavaria. I compare it to a non-native English student being placed in a deep Cajun household where every other word is hoo-eee and lawd sakes. You can't possibly guess the common ground of conversation we discovered. Dallas. Not the historical site of JFK's assassination, nor the fact that it's the ninth largest city in the United States--not even the Dallas Cowboys, but Dallas the television show. Upon finding this connection, my host father laughed boisterously, scurried to the front of his VW convertible and drew imaginary bull horns on the hood with his hands. After I assured him that all Texans did not ride horses and have cars with bull horns strapped to the hood, I realized how powerful stereotypes are.

Maybe that's why Dallas will always be a little more special to me than it should. Because the show had just started its translated syndication in Germany, gathering around for that hour each week became our common ground. Maybe that's why my host family wanted a French girl. No self-respecting French girl would put her family in the clink for oil rights.

Which brings me full circle back to the stereotypes still portrayed in the newly resurrected Dallas. Sure, the horns are gone, replaced now by sweet Italian sports cars. I can tell you first-hand from driving on both the Dallas North Tollway and the autobahn that there is little difference. Of the dozen or more cities that comprise the Dallas-Fort Worth metroplex, Dallas is most certainly where the money is.

Dallas is also where the hubris is. The stink about moving the home of the Dallas Cowboys out of the Dallas city limits to Arlington, a suburb between Dallas and Ft. Worth, was one of excessive pride. Nevermind that the seven million people spread throughout the surrounding cities contribute financially to the success of the team via ticket and merchandise sales. The Ewing family really capitalizes on the pride-goeth-before-the-fall premise.

I can also say, without hesitation, that out of all the places I have lived and visited that there is a reason Mary Kay headquarters is in Dallas. Women take care of themselves here. Women wear makeup here, even to make the trek to the mailbox. So when the Ewing women are dressed to the nines with lined lips and manicured nails, you can rest assured they smell rich, too. All authentic.

The spectacular plethora of good looking men here in jeans and cowboys boots? No stereotype, I assure you. Entire Harlequin lines of romance novels have been devoted to this natural wonder of beauty.

What about the series strikes me as inauthentic? Not one "ya'll" has slipped into the dialogue. Stereotype? Sure. During my lifespan, there has been a huge influx of transplants into this city. Some pick up this slang, some don't. But I don't buy into a family who has had a Texas ranch in their family for a century who doesn't let the Y-word slip occasionally. I blame that on the writers. Hollywood types, I'm sure. The thing about the Y-word is that it is no measure of intelligence. Think of it as efficiency and clarity. When addressing a group of individuals, "ya'll" covers more and better than the awkward "you guys" or "you all." Even J.R. would know a thing or two about efficiency.

The last thing you need to know about Texas that Dallas got wrong? Sure, Texans pack a lot of heat, but there's no place I'd rather be stuck with a flat tire on a dark highway. You see, people make eye contact here. They stop and move heaven and the flat, prairie grazing grounds to help strangers. All that backstabbing makes for great script, but you won't find much of that here. We have the death penalty and aren't afraid to use it. There is a code of conduct inherent here. Love your mama. Be nice to your neighbor. Hang the flag out, not just when its expected. Respect authority and your elders. Family above all.

At least Ms. Ellie would be proud they got that right.

What other Texan stereotypes have I forgotten?
Posted by L.A. Mitchell at 10:43 AM 3 comments:

J.R. Is No Dean Butler

I swept the dust bunnies out from the Vortex corners and did something I had been meaning to do for awhile now: remove photographs that weren't mine or protected under the fair use rule.  Mercifully, I hadn't relied too heavily on them for the past six years. I did, however, make the conscious decision to keep Dean Butler's photograph up. I'm thinking at this stage in his career, he'd shout, "Holy Half-pint!" that someone remembered him. The benefit to housekeeping is two-fold: it's the right thing to do and gives me stats that are content-based instead of image-based. My apologies in advance, but this means you will not only see more of my corn-pone, home-grown photography, but I won't be driving to Southfork Ranch to stamp an original image on my next post regarding the reincarnation of the DALLAS television show. I haven't been to Southfork since I was eight, and I wouldn't know where to begin looking for that picture.

For now, though, I'm celebrating my new ghostwriting project. Sure, that means things will slow a bit at The Vortex, but we've been there/done that before. Consider it time travel with less vomiting. And oh, the places I'll go.

Happy Monday, everyone!
Posted by L.A. Mitchell at 2:00 AM 5 comments:

What's In Your Chapter One Suitcase?

Anyone familiar with early drafts of my writing can tell you that beginnings are my biggest struggle. Not because the beginning doesn't come. It does. Boy, does it come. In a vomit of description and character and dialogue and tonal inflections and figurative language, it comes. I want the reader to be right there with me in all the places I have discovered and all those nuances left to discover, often all at once. Sometimes I forget the reader and I are not already friends, that we haven't spoken at least three dozen times about the grand "what ifs" of fiction. Sometimes I even forget the reader is looking for one good excuse to abandon the story.

Author Benjamin Percy compares readers at the beginning of our stories to coma patients. Have a look. I shall picture a reader burdened with a suitcase labeled short term memory each time I revise a story's opening. Since we're all about London this week, I say, "Brilliant."
Posted by L.A. Mitchell at 4:02 PM 6 comments: