Feed subscriptions to The Vortex have reached an all-time high. Two fist bumps and a snap to those of you who have hung around, bookmarked, linked up or otherwise shown the love. I believe there comes a time for all blogs, good, bad or obscure, to evaluate what's working and what's not. That's where you come in, my pretties.
I've set up a poll on the left. Tell me what you'd like to see more of. If you don't have an opinion one way or the other, tell me your favorite candy bar. Or deli meat. Deli meat is good.
For reasons which shall remain top-secret 007 Bond girl-territory, I have undergone an intense week-long study of forty five works of art from the Renaissance to the Modern Period. My favorite might be Anton Francesco degli Albizzi by Sebastiano del Piombo. Anton looks like a choirboy version of Rob Schneider. Serious mutton chops. A Renaissance Queer Eye who commissioned this work and convinced the artist that size did matter and pink was the new black. 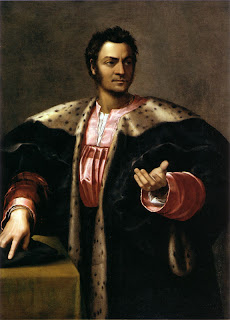 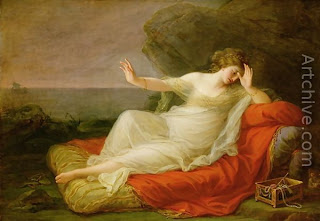 I'm pretty sure her right hand is raised, not as a symbol of her distress at being abandoned on a remote island by her true love after she kicked some femme-fatale ass on a monster to save him, but as a Romanticism-style middle-finger gesture. Would she not had to cradle her head in her left hand, I feel confident she would be shooting Theseus's departing ship the double-bird. Carry on Ariadne, your Sawyer awaits on the other side of the island, thirty years ago.
Speaking of which, as I'm all up into the art thing, ABC released three Lost Supper images to celebrate the Lost's final season. 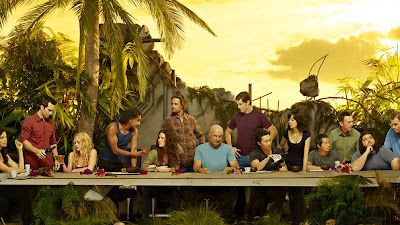 I'm sure in the Lost mythology, there is a direct correlation between each Lostie and their respective position when compared to da Vinci's original, but even Leonardo wouldn't have chosen such a hideous shade for Sawyer's shirt. My grandmother has a better pattern on her sofa.

If they were lost now are they found? Salvation through cancellation?

Voted! Have a great weekend!

Love the paintings--you've got some serious snark to you, girl!

(Would you still love me if I told you I've never watched Lost? I'm not saying I haven't, just, you know...hypothetically.)

I'm not much for voting on these kinds of things but I'll make an exception in your case.

I watched the first season of Lost, then missed a few episodes of the second season and became (no pun intended!) totally lost. I'm waiting till all the seasons are out on video to get from Blockbuster.

check out the post i made fur ye, lam ;) lol